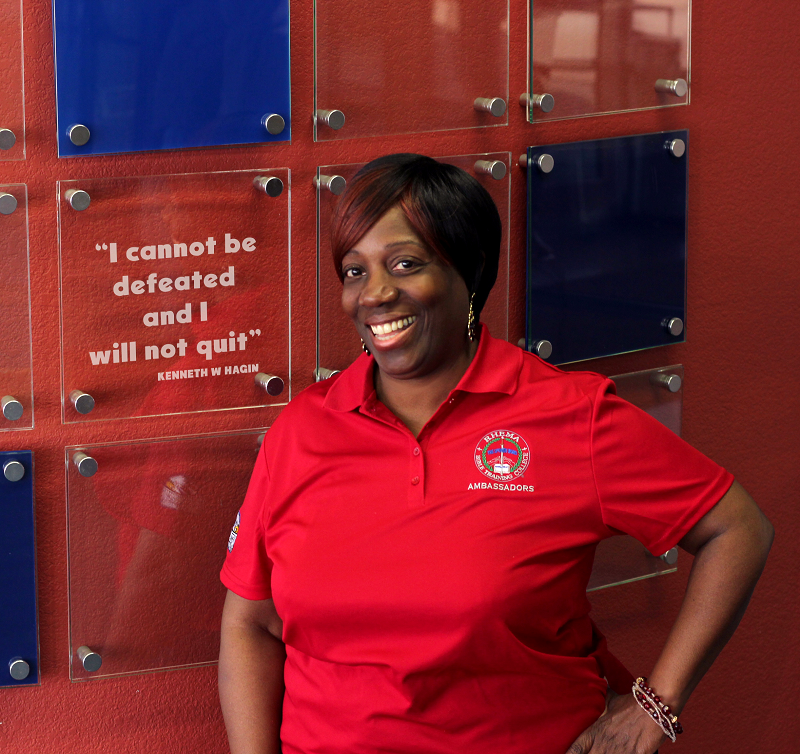 One day as Jackie McCoy was looking through The Word of Faith magazine, a Spring Rhema College Weekend (RCW) ad caught her attention. On impulse, she registered to attend. Although she thought it would be nice to see what Rhema Bible Training College was like, she was more interested in stocking up on books and CDs. Ever since she’d first heard Kenneth E. Hagin on TV, she couldn’t get enough of his material.

Almost as quickly as Jackie registered for RCW, she changed her mind about going. She thought Lynette Hagin’s Kindle the Flame Women’s Conference would be a better fit. There would be more time to plan, and she would be able bring her daughter. In Jackie’s mind, everything was settled–wait until September.

Step 1: “Drop everything and get to Rhema’s campus.”

The day before RCW began, while Jackie was at work, the Holy Spirit kept strongly impressing her to go. She couldn’t shake the feeling that she needed to drop everything and get to Rhema’s campus. Finally she went into the administrative office at her job and asked if she could use a computer.

To Jackie’s surprise, the woman immediately relinquished her computer–something she had never done! Jackie made plane and hotel reservations.

When Jackie got home from work, she told her 18-year-old daughter, “I don’t know why, but I have to leave tonight. I can’t take you with me, but you’ll be OK.” Within an hour, Jackie had packed her suitcase and was headed to the airport.

While in Broken Arrow, Jackie loved Rhema College Weekend. She met wonderful people and was amazed to hear how God had called them to Rhema. But she returned to South Carolina without any inclination to apply to the school.

Step 2: “Pray in the Spirit the entire way”

Eventually Jackie’s daughter announced that she was moving to Maryland to live in the city with her father. After her daughter moved out, Jackie became aware that God was dealing with her about attending Rhema.

Jackie knew God wanted her to go to Rhema, but she wasn’t sure how to make the transition to Oklahoma. She started with baby steps. She began telling her coworkers that she was moving out of state. One coworker later offered to store her furniture in an empty trailer on her property.

But others tried to talk Jackie  of leaving! “Why Oklahoma?” they asked. “Who do you know there?”

Jackie didn’t know anyone in Broken Arrow. She didn’t have a job, a place to stay, or money for tuition. But Labor Day morning, she got in her car and headed west–praying in the Spirit the entire way!

Step 3: “Help others to get there”

Once Jackie arrived in Broken Arrow, everything started falling into place. She got a room in the same hotel she’d stayed at for Rhema College Weekend. On Sunday when she attended School of the Bible (Sunday school), she was invited to a luncheon. There she met a woman who invited her to stay in her home until she got settled. The following week she attended a job fair in Tulsa and immediately got work. And over the next year she saved up money for tuition.

During her journey to Rhema, Jackie sometimes felt like she wasn’t moving forward. But each step–no matter how small–gave her enough momentum to take the next step. And finally she started classes at Rhema Bible Training College.

Now a second-year student in the itinerant ministry group, Jackie is helping others get here. She is a Student Ambassador, helping prospective students through the process of coming to Rhema. She has heard many “I think I can’t come” excuses. “I have a family.” “I have a house.” “I’m too old.” But Jackie knows first-hand that when you take that first step, God makes a way.

If you want to learn more about Rhema Bible Training College, click here. You can listen to testimonies of former students, find out about Rhema’s programs, and request an application.